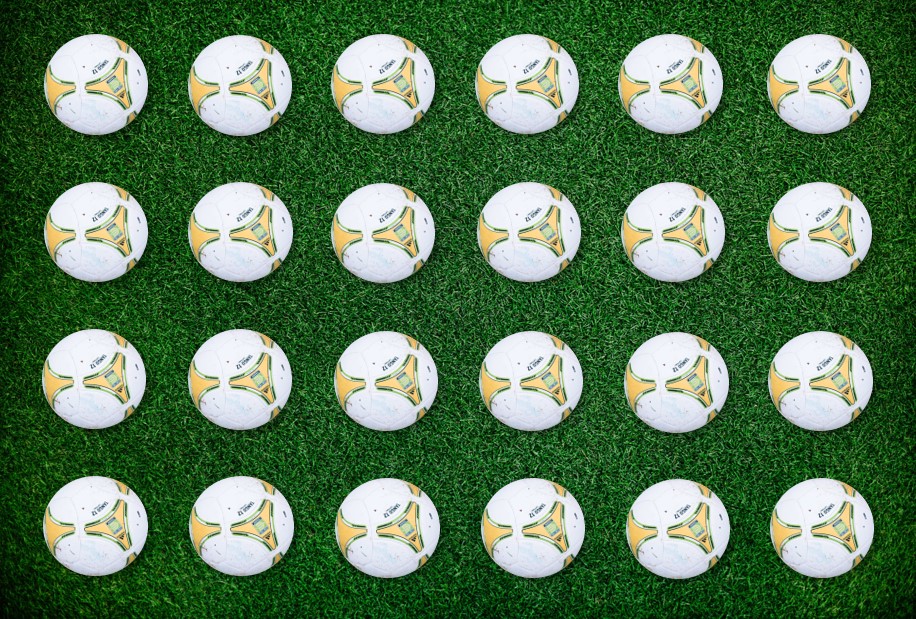 A new exciting season of the German Bundesliga kicked-off exactly one month ago. As the football fever has hit us all, we have checked the current ticketing status of the football clubs competing this year in Germany’s top tier football league.

The result is the Grand German Bundesliga Ticketing Check, a benchmark on how the top 18 football clubs are pricing and selling tickets in the present 2019/20 season.

When it comes to ticket pricing strategies, a common practice in football is to set different prices for different seat types and sectors. However, it is not well known that clubs generally establish more than one price list for their home games to optimize their revenue potential. In the professional sports industry in Germany – with football being no exception – this is the most popular pricing strategy. It allows clubs to react to expected changing demand situations by choosing from a variable number of set price lists based upon several factors such as the opponent, the day of the week and the time of the football season.

In the German Bundesliga ticketing world, there seems to be no general rule when it comes to the number of price lists. In the top five ranking of the football clubs using the most price lists we can find the following teams: 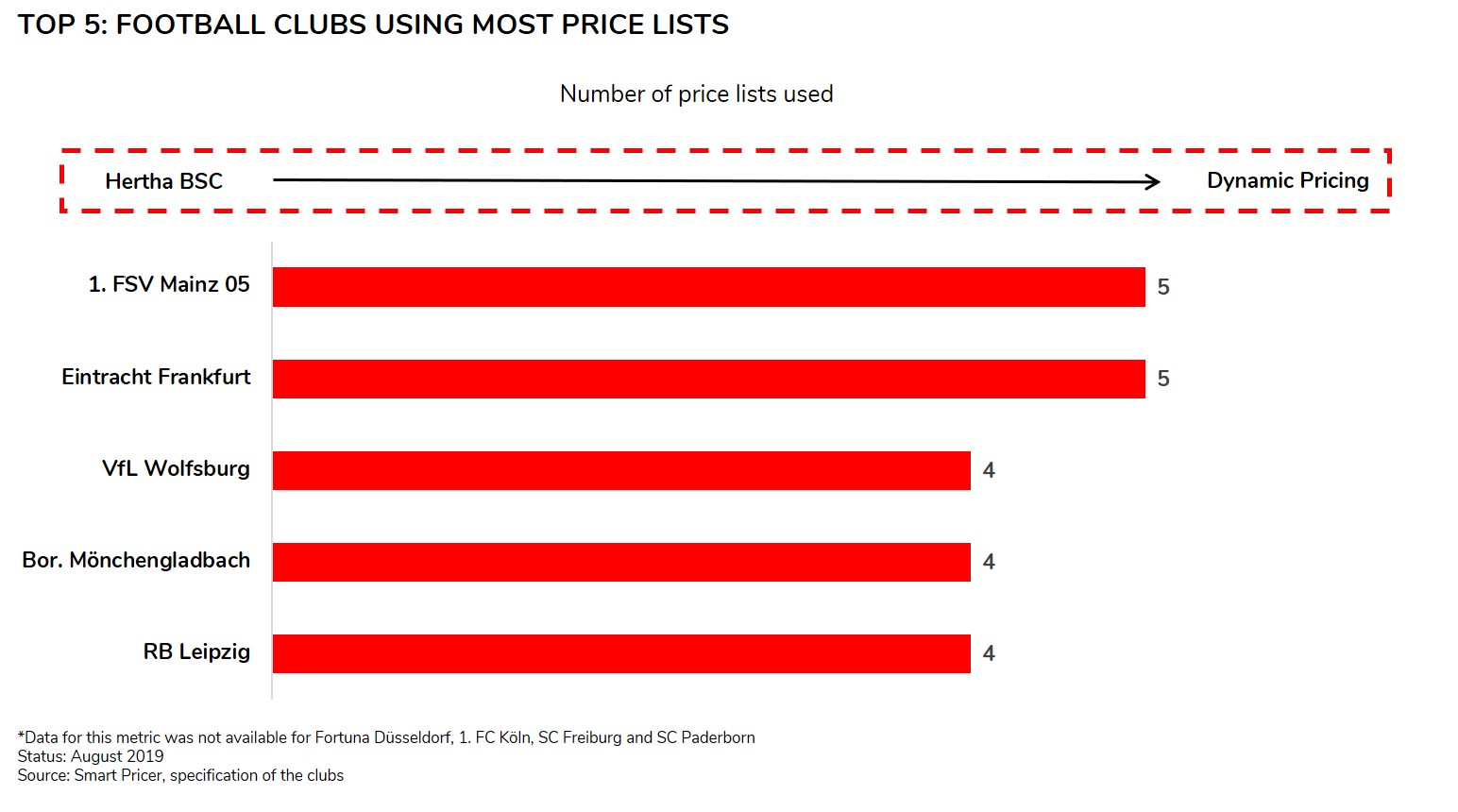 The majority of the football clubs in the German Bundesliga are leveraging the power of price differentiation – but to different extents. The total number of price lists used by each team ranges from one to five. On the one hand, three football clubs only set one price list and therefore price each home game equally:

On the other hand, the top position in our ranking is shared by the following two clubs:

Both have a valid number of five price lists to choose from in order to effectively set the right prices for each match.

Nonetheless, there is a football club which has gone even one step further: Hertha BSC. This is the first-ever football team in the German Bundesliga that has implemented dynamic pricing to set its home game ticket prices in the current and past three seasons. Hence, the club has no fixed price lists.

However, there is a distinction that needs to be understood. A price list strategy enables a degree of price differentiation between different games which is referred to as static: it is agreed upon in advance and is not modified afterwards while match tickets are on sale. On the contrary, dynamic pricing allows to continuously adjust prices in real-time based on dozens of demand drivers such as pre-sales, social media buzz and the sporting performance of the team and opponent. To better understand this difference, below is an example of how a price list strategy looks like: 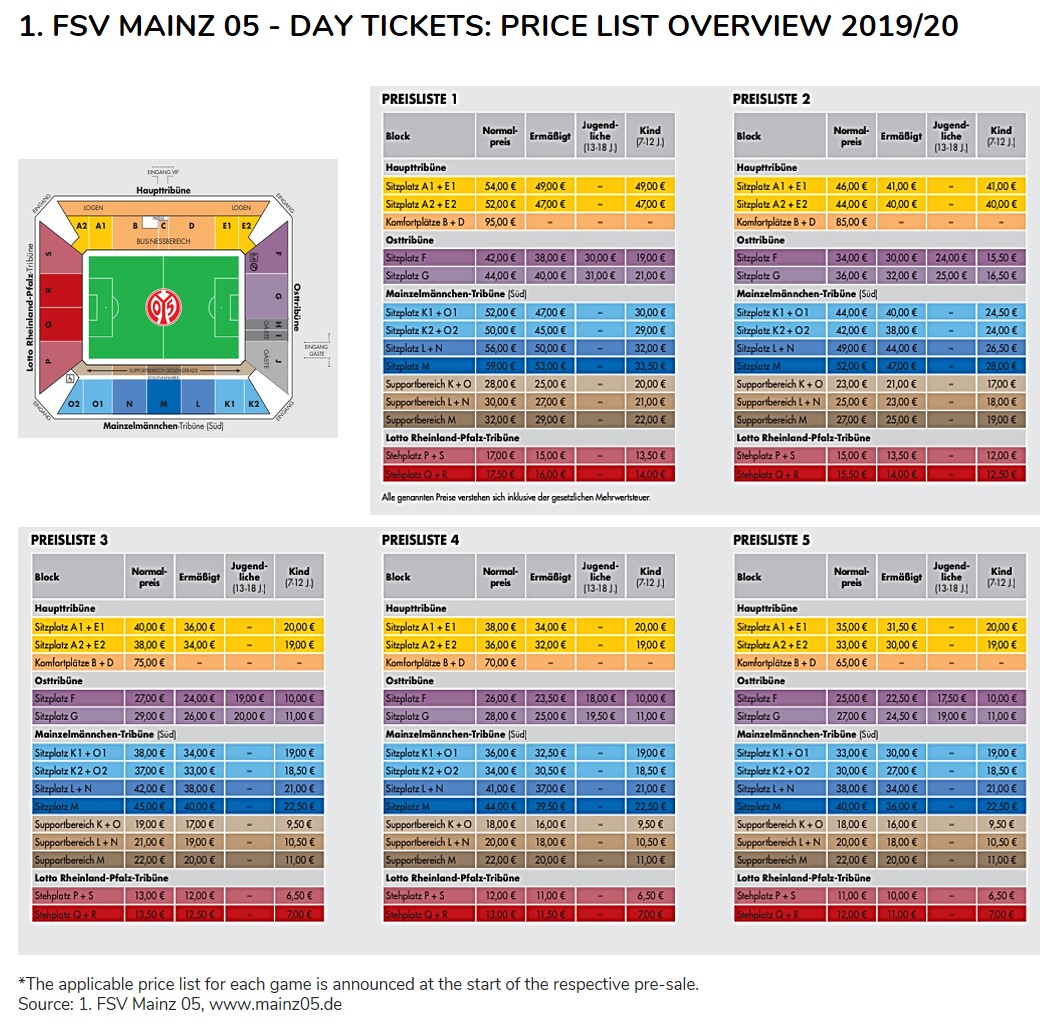 With this in mind, it is noteworthy to point out that 9 out of 18 clubs choose their price list for each game only based upon who the opponent team is. This means that they set ticket prices per game prior to the start of the Bundesliga, ignoring several other important factors that influence demand, such as time in the season, sporting performance and day of the week.

So what can we learn from all this? Although many football clubs in the German Bundesliga have realised the potential to generate more revenue and bring larger crowds to their stadiums through price differentiation, there is still much to be explored when it comes to optimal pricing strategies in sports.

A second interesting point that we have checked is how well football clubs differentiate their day ticket prices in their various home game price lists. To ensure comparability, we have taken into consideration only the maximal adult seating ticket prices and have used the max-min ratio between the cheapest and the most expensive game as metric.

In order to better understand where this number comes from, below you can find an overview of the ticket price differentiation between the price lists taken into consideration. Data for Hertha BSC was not available since they implement dynamic pricing and therefore do not have fixed price lists. The same counts for 1. FC Köln, Fortuna Düsseldorf, SC Freiburg and SC Paderborn which only publish the applicable price list for each match before the tickets go on sale. 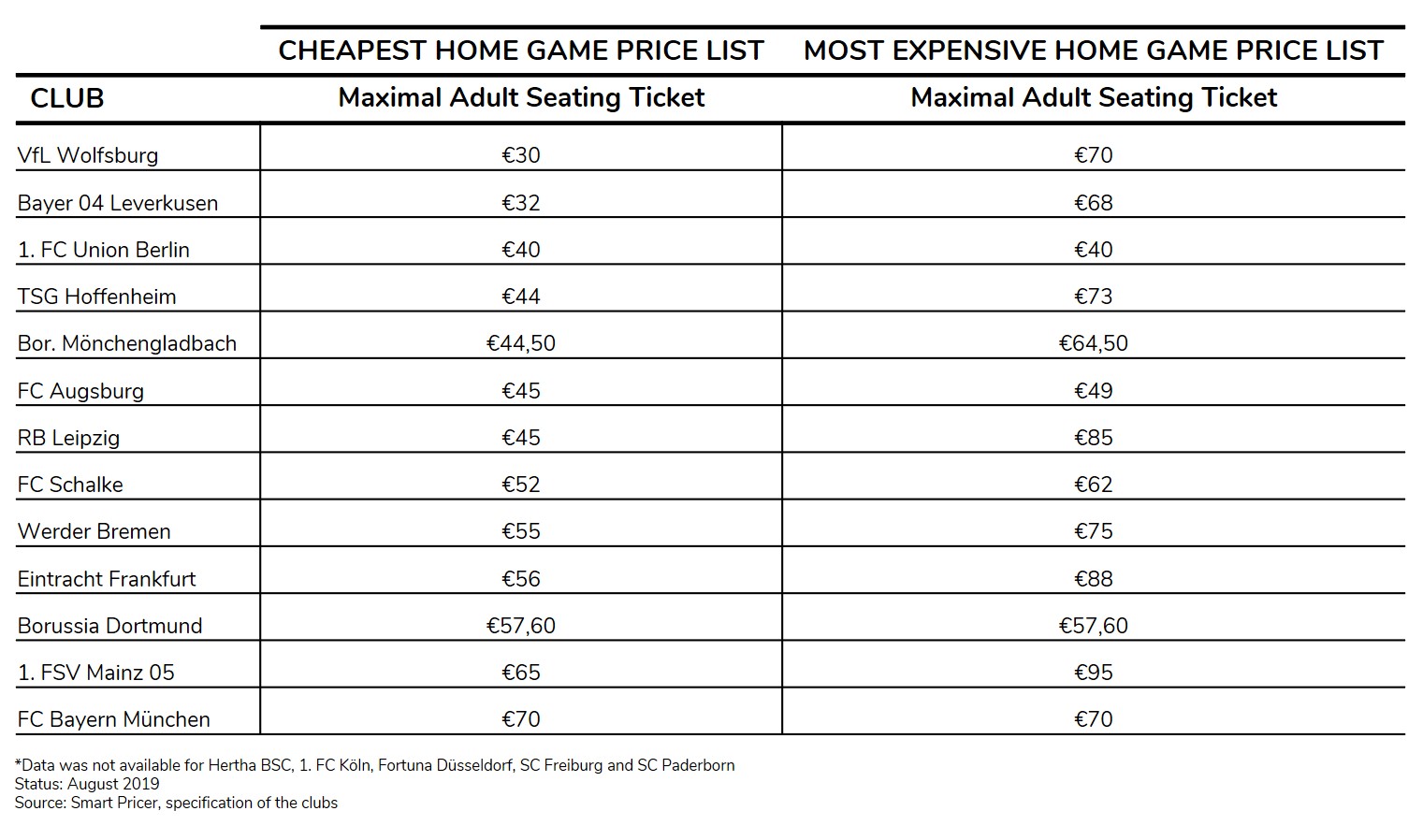 Therefore, the top 5 football clubs with the highest max-min ratio are the following: 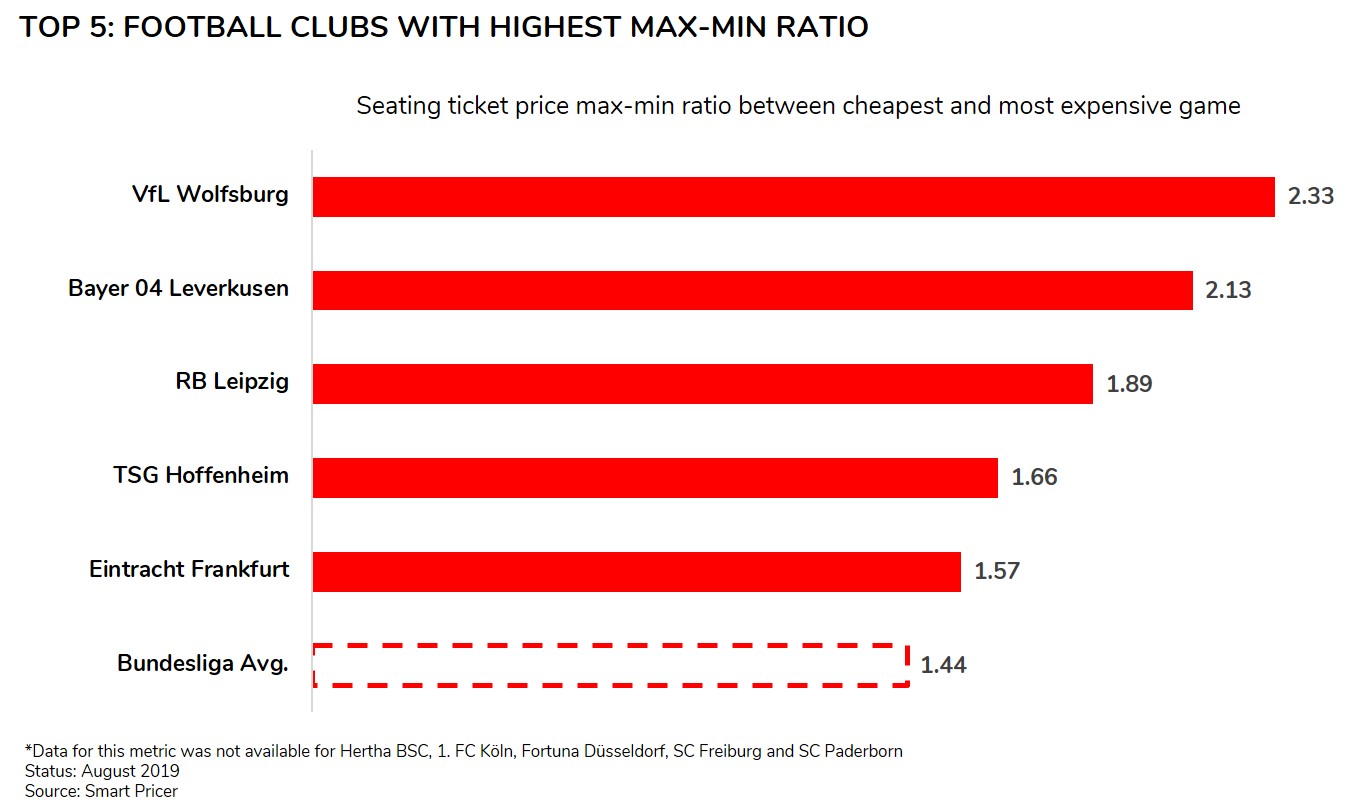 Placing first in this case is VfL Wolfsburg, which scores a max-min ratio of 2.33. This number results from the fact that the adult seating ticket is priced €70 maximally in the most expensive home game price list and €30 in the cheapest one (€70/€30 = 2.33). When considering the average of the Bundesliga, the ratio is equal to 1.44. On the contrary, the lowest max-min ratio identified amounts to 1 and it is shared by the three aforementioned football clubs only offering one single price list for all their home games.

But what does the used metric indicate? A higher ratio signifies a higher ticket price differentiation between price lists. This is a very important factor to take into consideration when it comes to ticket pricing best practices. As not all matches are equal, each one of them attracts a variable number of fans to the stadium and is therefore distinguished by a different demand level and willingness-to-pay of target groups.

Therefore, it is crucial to offer a high degree of ticket price differentiation between season games in order to optimize revenue potential and stadium attendance every time. As our ranking shows, some football clubs of the German Bundesliga are already implementing this practice successfully.

Last but not least, we have checked how easily fans can buy game tickets on the online shop of the football clubs. We have literally done some hands-on research: for each team, we have clicked our way through the entire purchasing process starting from the ticket shop as a registered fan. Below is the top 5 ranking showcasing the clubs with the fewest clicks to buy a ticket online:

First of all, it is worth pointing out that none of the football clubs allows to finalize a purchase in their online ticket shop without registration. From a business point of view, this is certainly a good practice. It enables to gain deeper insights into the target group and to optimize the offer and activities accordingly.

For those clubs of the German Bundesliga which have not made it to our top 5 in this case, it takes up to fifteen clicks to buy a ticket online. At the same time, 6 out of 15 football clubs allow fans to finalize their ticket purchase with just eleven to twelve clicks. Surprisingly, three teams share the top position of our ranking with as little as ten clicks, leading the way when it comes to online ticket purchase ease.

To put this into perspective, we have benchmarked the rates of the Bundesliga football clubs against those of the airline industry, albeit knowing that more information is usually needed to buy a flight ticket. If we consider that it takes on average 40 clicks to book a domestic flight online – according to a recent research conducted by the Lufthansa Innovation Hub, it is safe to say that German football clubs are already successfully facilitating the online ticket purchase experience for their fans.

But why is it that requiring less clicks is preferable? It is all a matter of user-friendliness: fewer clicks translate into a shorter time spent on the online ticket shop, an easier purchasing experience and happier fans.

All-in-all, the Grand German Bundesliga Ticketing Check has enabled to get a big picture of the current ticketing practices adopted by the top 18 teams competing for the national title this year. What are the key takeaways? Football clubs are already successfully facilitating the online ticket purchase experience for their fans and are leveraging the power of ticket price differentiation to varying degrees. Nevertheless, there is certainly still room for improvement to keep innovating and advancing in the sports ticketing world.